You are here: Home / Domestic violence 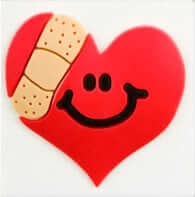 anyone who’s ever gritted his or her teeth through this Hallmark holiday named for a Christian martyr knows, Valentine’s Day isn’t always a happy day.

It is with this in mind that I dredge up a ghost of valentines past. I wrote this piece in 2002 and posted it on my original website, Cruel but Just, which was a pre-Blogger attempt to warp hearts and minds on the Internet. I haven’t thought of this guy in years so don’t go all psychoanalytical on me. I’m just saying that there are worse things than being alone.

I just got home from the latest Rush concert and thought of you. All 235 hairy, girlfriend-beating loser pounds of you. Do you weigh even more now? It’s been a long time. I know I won’t find you on Classmates.com, since you’re a high school dropout. I guess you couldn’t take the pressure of Algebra.

I was remembering the first concert we went to, the Signals tour, 1983. Those were the days, huh? After you’d been arrested for tipping over gravestones but before you were banned from school property for giving booze to underage kids.

Nearly twenty years later, I’m at the Vapor Trails tour. Front row, right in front of Geddy, getting a smile and a wink as I sing along with him, not missing a lyric. I’m wearing my Signals tour shirt. You didn’t buy me that t-shirt—I had to get it last year on e-Bay. In fact, back then I had to pay for our tickets with money from my after-school cashier job. I couldn’t afford the first row back then—but you couldn’t afford the last.

Right before the encore, Working Man, (which you never were, by the way) Geddy points to me and has a roadie give me a special t-shirt, one of only a few printed to say it’s directly from him. My husband is psyched, gives Geddy the thumbs-up and tells me I’m hot. He’s happy to see me having a good time and tells me I’ve still got it.

I might not have lived to see this concert if I’d stayed with you. You might have killed me one day for talking to the mailman. You’d already choked me for pretending to rip a page out of a magazine and tried to throw me in front of a car for some reason I can’t remember, but which I’m pretty sure didn’t warrant that kind of reaction.

You were so frustrated when I got that scholarship, you told me you’d thrown a bottle of shampoo against the wall when your thumb covered the “n” in “collagen.” I was tempted to tell you that spelled COLLAGE, not COLLEGE. It would’ve almost been worth the beating I would have gotten.

You were so angry that I wouldn’t give up the scholarship and move in with you and your mom. You didn’t understand why I couldn’t be happy with that. And now you sit in your shitty little apartment on Main Street, maybe eating a little watered-down Dinty Moore. Remember how you used to add water and a bouillon cube to stretch it? Do you still return cans so you can buy another six-pack of generic beer?

I have to tell you, though, how much you helped me all those years ago. You scared me into running away from my hometown to New York City, where I met a wonderful man, married him and lived happily ever after (with all the bumps in the road a normal person would expect, but no tosses into traffic). Oh, and I got to sing with Geddy Lee. So, you see, you did me a real favor back then. But I’m not going to send you a thank you card.