When did Angelina Jolie go from being an S&M-crazed, goth bisexual to a beaming earth mother? Is this a sign of the apocalypse? She’s already taking Maddox to buy knives! (Not that there’s anything wrong with that if you’re into cutlery. Jolie’s mother bought her knives and look how great she turned out.)

And she was breastfeeding (stay focused, guys) and got tattoos? Were her twins hanging on her teats while she got inked? It seems that laser removal didn’t completely get rid of the old Billy Bob tat, so she’s having it covered with the latitudes and longitudes of her children’s birthplaces. Was she pissed she had twins because the last two map entries are exact? Or did she waddle to another delivery room while number two was crowning so the numbers wouldn’t match? 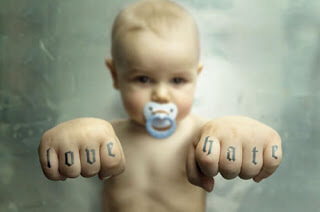 She’s a beautiful, complex woman. It’s more fun to keep up on her life than it is to focus on issues that really matter. But it can’t last forever. She’ll fall from grace: you know she will. What will it take? Will it be when she treats Pax to a SpongeBob tattoo? And not to be catty, Brad, but Popeye Doyle called. He wants his hat back.