You are here: Home / What are words for?

At Magick Sandwich, we like to have a little fun with prefixes every once in a while. Why should plain old nouns and verbs have all the fun?

Unbelievable: Here’s a brain teaser for you. The initial report went like this: At 2:25 A.M., Tiger Woods was leaving his home when he ran into a hydrant with his SUV. It happened at low speed. The airbags didn’t deploy. His wife broke the window with a golf club to free him. It doesn’t take long to come up with this equation: Hasty departure in the middle of the night + wife in driveway swinging a golf club = trouble at home.

This should be a lesson in critical thinking. If the guy’s own publicist is gagging on the story, you should think twice about it. (Because I must, let me get the obligatory golf-related joke out of the way. If Woods had been feeling more successful in his career, maybe he wouldn’t have been putting on someone else’s green. And his wife wouldn’t have been aiming for a hole in one. I have more but they’re even worse.)

Unspoken: Did you know that November 27th was the National Day of Listening? Me, neither. I guess everybody was too busy listening to be able to tell us. It’s a day to appreciate the stories of your friends, family and others, to make time to hear them speak about their lives.

Next year, perhaps the organizers should plan ahead and tell us about it, so we’ll know that, just like Mother’s Day, Father’s Day, Valentine’s Day and so many others, there’s just one day a year that we have to be aware of other peoples’ importance and contributions to our lives. Now we’re free to jabber on, be self-involved and thoughtless for the next year. Just mark your calendars: you wouldn’t want to miss that one day of caring.

Unfriend has been chosen as Oxford English Dictionary’s 2009 Word of the Year. Facebook must be so proud. The corrosion of our language continues apace.

Over the coming months, we should all submit entries for Oxford’s 2010 Word of the Year.I’ve come up with a couple based on my viewing of A&E’s Hoarders. (I watch it to feel better about my own housekeeping.) The subject, Augustine, had not one but two dead, desiccated cats squashed flat under the garbage in her living room. This is something I will never be able to “unsee” and now you cannot “unknow”– come on, Oxford! If you’re going to degrade the English language, the least you can do is let me help! 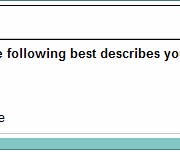 On occasion, I participate in online surveys. If you’ve read any advertising telling you how much money you can make from filling them out, it’s true. I’m writing this to you from my yacht.

After completing quite a few, and marveling at companies’ need to hear my humble opinions, I felt I’d become something of an expert. At the very least, I was well-versed in answering the demographic questions which precede each one.

Imagine my surprise when I saw this:

Granted, I’ve seen different iterations of this question over time. It used to be simply: What is your gender? I assumed someone had complained about the plain-spoken rudeness of that when I started to see this variation: Which do you consider yourself? I still found this relatively straightforward. I remained confident of my reply.

But now they ask me this: Which of the following best describes my GENDER? Suddenly I’m confused. Who is doing the describing? If it’s the man who saw me pumping gas, wearing a plaid shirt after I’d gotten my hair cut too short, which way would he lean?

If I’m describing it, how best to judge? I’m not a fan of menstruation, but my junk is on the inside. I watch football but don’t spend all day taking a dump while reading the paper.

I could be a pre-op transsexual. If we haven’t had the surgery, aren’t we all pre-op transsexuals? Where will we get all those testicles? Will they use ping pong balls? Surely racquet balls would be too heavy. And where would we put them? It seems like they’d just be in the way. Why don’t more men wear skirts?

Okay, I don’t have testicles, but does that truly make me female? Wouldn’t a man whose huevos fell victim to an unfortunate threshing machine accident be offended that I’ve made this assumption?

Damn these online taskmasters! Describing, I can understand. I can do that. But best? How can I know for sure?