1. I’m not sure if I’m middle-aged because I don’t know when I’m going to die. But with every birthday, the conceit gets closer to science fiction.

2. Two years ago, my husband and I went to an Ozzy Osbourne concert at Madison Square Garden. We were deaf for three days afterward and decided (à la Danny Glover) that we were “getting too old for this shit.”

Next week, we’re going to Radio City Music Hall to hear Karl Rove debate James Carville. I am so stoked. If Carville says my favorite line, “I wouldn’t piss down his throat if his heart were on fire,” I’m going to throw my bra onstage.

3. We’re big boxing fans. We saw the first Mickey Ward v. Arturo Gatti fight from the third row. We could smell the blood. I used to box with a personal trainer for fun. Now I get tired out after three rounds of boxing on the Nintendo Wii. I can taste the blood.

4. I consider a good bowel movement a major accomplishment. Not because I’m constipated, just because it’s creative.

5. If I ever lose my mind, I want to make sure I’m still patriotic. So my Living Will stipulates that my caregivers dress me in the following shirt.

6. When I die, I want to be buried in Florida. I’ll finally own real estate that even Disney can’t build on. That’s power.

7. I want my tombstone to say this: 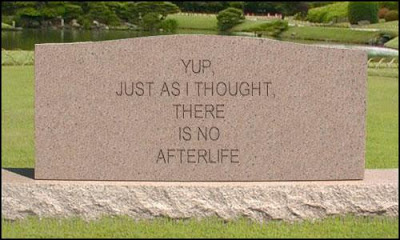 Then again, maybe I’d rather it say something simple, like this: 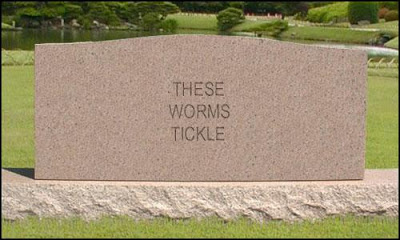 I can’t decide, you see. I’m getting old.

By the numbers:
7 Good Band Names
9 Ways to Prevent Your Own Valentine’s Day Massacre

To Reconstitute Man?
Scroll to top