You are here: Home / Politics / Anthony Weiner Waves His Wiener Once More

Back in June of 2011, I thought we had put the issue of Anthony Weiner to bed, as it were. He had finally resigned from Congress after a “sexting” scandal. Whether you call it moral turpitude or just good clean fun, Mr. Weiner, with his tailor-made-for-a-joke name, had shown an astonishing lack of judgment and paid a steep price for it.

How could anyone trust a public official who thought randy Facebook messages and Twitter pics of his own congressional member were a good idea? The photographic proof that he shaved himself bald as a toddler might not be technically illegal but I believe it constitutes an ocular assault, creating a face/testicle association that can only be overcome by never seeing either again.

After a period of denial that his political life was over (as reported in our own Weiner Watch 2011), he resigned. His beleaguered wife gave birth and he disappeared into private life, taking the memory of his pristine taint with him. And all was well until it wasn’t. Mr. Weiner had taken time off, done a lot of soul-searching and decided he should run for New York City mayor.

Perhaps he was emboldened by Eliot Spitzer’s current run for city Comptroller. Spitzer was a tough attorney general with a reputation for chasing bad guys like an Old West marshal before being elected governor of New York State. He derailed his career by getting caught patronizing prostitutes and gradually rehabilitated his image by (1) acknowledging his hubris, (2) appearing as an expert on his own and other TV shows, and (3) taking a pummeling from comedians like Stephen Colbert, who asked him why we should elect a comptroller who has no self-“comp”trol. A good sense of humor goes a long way with New Yorkers. I just hope he’s learned his lesson.

Which brings me back to Mr. Weiner. Apparently, he has not kept his wiener under wraps and has consequently seared my brain further with the mercifully pixellated yet still obviously denuded object of his affection. (I’m sure the uncensored version is available for viewing but I’m not going to look for it. I have nothing against the penis per se. I just believe in our right to choose.)

In his 2011 press conference, he admitted sending naked pics but said he couldn’t be sure it was his penis in the photos that surfaced. I’ve heard of face blindness before, a brain disorder that renders the sufferer unable to identify any face, but this may be the first recorded case of dick blindness. Waking up each morning unable to recognize his own groin would explain his constant urge to get reacquainted and his compulsion to photograph it. In essence, he was sending a digitized flyer that might read something like this: 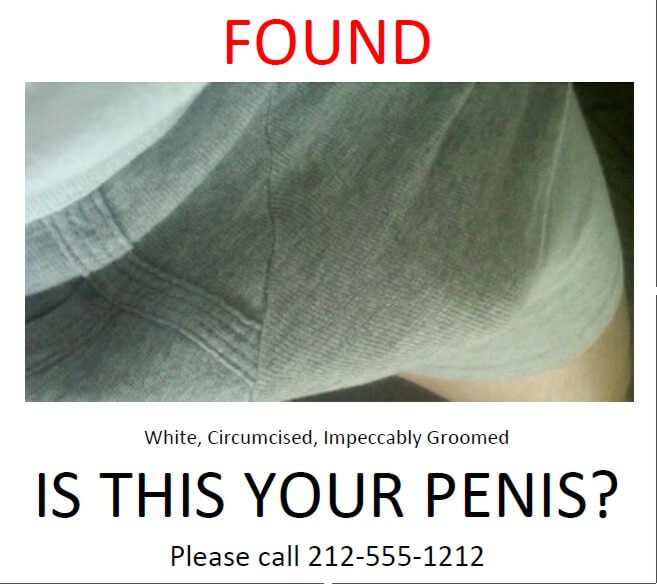 So many people have seen it, it’s surprising no one has claimed it yet. Perhaps he should try putting it on the side of a milk carton.

The shame of being forced to resign from Congress has not dimmed Weiner’s enthusiasm for engaging in smutty wordplay and sharing images of his proud phallus. Having been through this before, he still believes he can be taken seriously as a political candidate without fear of ridicule or more scandal. It’s difficult to see this as anything but an IQ test Weiner can’t seem to pass. But there are a couple of differences this time.

On Tuesday, his wife Huma Abedin was by his side at the press conference and gave a poignant speech. It’s a savvy move. If she can forgive him, can’t we all? Then a reporter asked Weiner when his wife found out that he had continued to send messages even after his resignation from Congress. His reply? “She knew all along, um, the process as I was more and more honest with her.” Funny, that sounds much like what happens when lies fail, one after another, until the truth is all that’s left.

It’s a shaky basis for a claim to the moral high ground but hardly enough to disqualify him for public office.  I can even forgive him for thinking that switching from Facebook to Yahoo would protect him from discovery. For me, the final nail in the coffin of Weiner’s career is his choice of pseudonym: Carlos Danger.

This is my new favorite T-shirt.

The moniker has even inspired an unlikely ad campaign by Spirit Airlines, which offers a discount to celebrate the disgraced politician’s, ahem, rise: 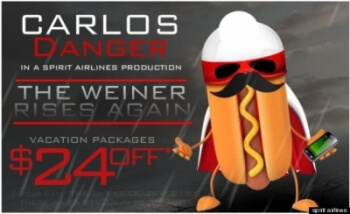 image not to scale

Naughty Little Elf Gets off the Shelf
Scroll to top